The Ancora Project was born in 2004 to build and manage health centers integrated into public service network, developing a unique public-private relationship, pioneer in the country, which serves a very vulnerable population. There are three Ancora primary health centers which are operated by the Red de Salud UC CHRISTUS. Today these centers serve a population of 65.000 people, from a total of 1.5 million people that live in the southern part of the city of Santiago.

Ancora centers have shown greater clinical effectiveness expressed in reductions of 25% in referrals to secondary specialties, 70% in emergency visits and 30% in hospitalizations, in relation to other municipal health centers located in the same municipalities. The effects were associated with higher user satisfaction.

The challenge now is to increase its clinical care capacity. Ancora centers cannot continue to expand their services without growing in its infrastructure. The centers are one-story buildings with 1600 m2, and the challenge is to build a 2nd floor in each center, growing by 10% of surface and allowing an increase of about 25% of health care.

A local and an international campaign are planned to start in November 2015. The campaign in the US is supported by Friends of Catholic University, a non-profit foundation that collaborates with the Catholic University of Chile in the promotion and support of its activities and projects. The Foundation is public charity that is exempt from taxation under Section 501(c)(3) of the Internal Revenue Code, so donors who make contributions may receive a charitable deduction on their income tax returns.

To achieve this goal we want to invite you to be part of the “Campaign 10X”, making a donation, for example, of:

All donors will be informed about the advances of the Project and also about the funds collected for its implementation. They will also be invited to be part of “Friends of Friend´s UC. 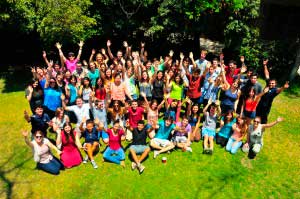 Leading the Way Scholarships offers English training to UC undergraduate students, with a special focus on the American cultural context.

Students selected for this scholarship come from different undergraduate programs and havesustained outstanding results throughout their studies at the University despite hailing from socioeconomically disadvantaged backgrounds. These students have taken advantage of the compulsory English courses offered by the University early in their studies and they stand out for having achieved remarkable progress in the English language in a relatively short amount of time.

The first stage of Leading the Way Scholarship consists of a course in Local Training in the English language lasting one semester and a half, which allows students to strengthen their knowledge of the language as well as to gain insight in the American culture mainly through discussions and group work. This stage also includes the Global Classroom, a program that promotes the exchange of ideas and cultural interaction between students from UC and “Drexel University”, increasing the exposure that students from both countries have with native speakers of the language they are studying.

The second stage offers the opportunity to study abroad at Drexel University in Philadelphia for four weeks. The program consist of 21 hours of English language classes per week, as well as an afternoon leadership case study, in which the students will meet in small groups with different types of leaders (academic, business, community) to enhance their leadership skills.

Finally, students returning from the study abroad experience will mentor and share experiences with subsequent generations of Leading the Way participants.

Leading the Way scholarship fund relies on the support of generous donors such as you. All donors will be informed about the advances of the Project and also about the funds collected for its implementation. They will also be invited to be part of “Friends of Friend´s UC.

“Campaign Donating a Scholarship”, making a donation, for example, of: 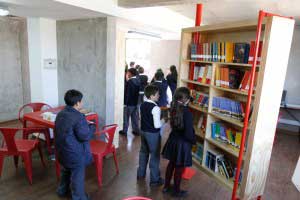 Starting in 2014, the Pontificia Universidad Católica de Chile launched the project “Future School Libraries” inside its campuses and in associate centers. These libraries were set up with the aim of attr

acting students and teachers from neighboring schools to the University’s campuses, many of them located in underprivileged areas. Satellite libraries have also been opened in a local women’s prison and a juvenile detention center, thus addressing a particularly vulnerable audience.

The project has developed quickly and there are now nine “Future School Libraries” in activity throughout the country. They have a reach of up to 61,200 students and 6,800 teachers and the aim is to get to a total of 14 libraries catering for 100,000 students by 2016.

The libraries have proved very popular with both students and teachers. Faced with the reality of an increasingly globalized world in which the English language constitutes a crucial tool, the libraries are now being equipped with a space dedicated to the learning of the English language, stocked with educational material to help students wishing to improve their knowledge of the language.

Through this initiative known as the English Corner Project, a space in each “Future School Library” will be equipped with English material so that the children and teenagers who come to the library get free access to these English books and resources. The aim is to turn English into a more accessible and attractive language for these students who wish to learn more outside the classroom.

For many of these students, the project will represent their first interaction with the English culture and literature. For these reasons, the English Corner will also include work guides to make navigating the resources easier. Some of the material on offer will include books with explanatory notes, multimedia resources, movies and videos.

Donate to the English Corner Project:

“Campaign: One Child’s Journey to the English Language”

All donors will be informed about the advances of the Project and also about the funds collected for its implementation. They will also be invited to be part of “Friends of Friend´s UC.