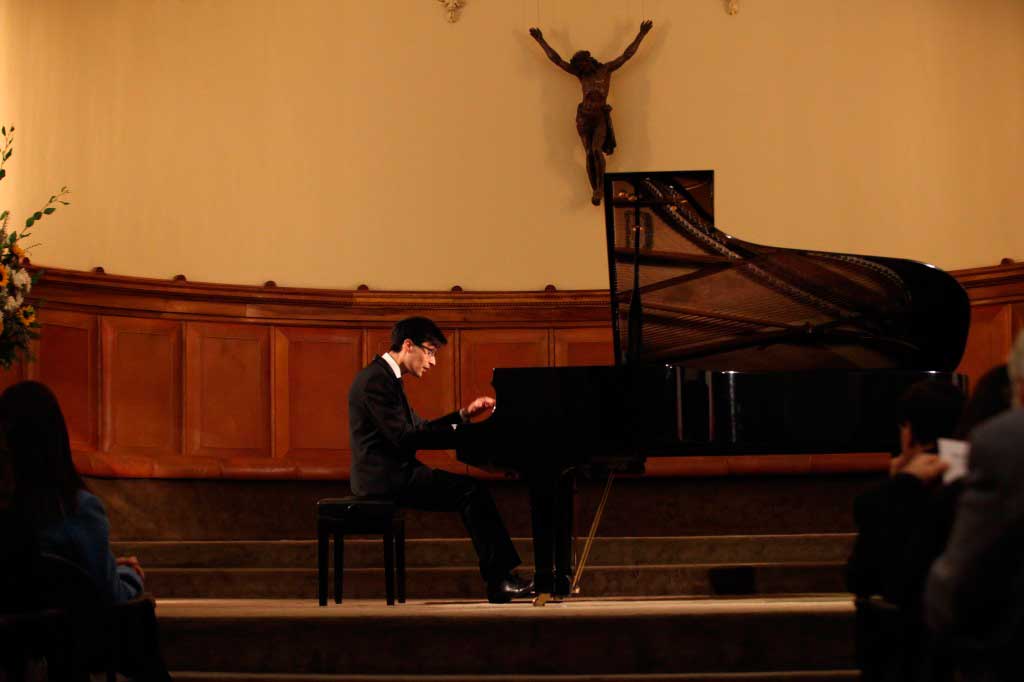 As part of the activities organized for the visit to Chile of the Board of Friends UC, renowned Chilean pianist Gustavo Miranda-Bernales performed to a full house in the Salón de Honor of the university’s central building. The recital program included pieces by Joseph Haydn, Johannes Brahms, Gabriel Faure, John Musto and Frédéric Chopin.

Twenty five year-old Gustavo Miranda-Bernales is one of the most promising pianists coming from Chile and from all of Latin America. He talked about his life in New York, a city he made his own when he received a scholarship from the Juilliard School of Music in 2008. This followed his initial training at the Institute of Music of the UC where he started studying from the age of eight under the guidance of his professors Miguel Ángel Jiménez and María Iris Radrigán whom he remembers fondly.

Playing in the big league in NYC

“I am happy to be back at UC because this is where I initially trained”, Miranda-Bernales explains from his flat in New York, the city where he has lived for the past eight years while his family has stayed in Chile. Ever since his move, he admits “having lost touch with the Chilean music scene”, apart from occasional visits like this one.

His next performance will be in Brazil and he will also go to Taiwan before coming back to Chile in July in order to play at the Teatro Municipal in Santiago where he has already performed in the past. Miranda-Bernales usually memorizes his pieces, playing without the support of a written score but considers this normal practice for musicians: “many pianists learn their pieces by heart.”

Miranda-Bernales also explains that it is common for pianists to start their career from an early age. He started a rigorous training from the age of eight but “even this might be considered late to start a pianist career”, he says. However, he quickly made up for this ‘delayed’ start by “learning faster than the others”. When he was younger, he used to compose too. Although he gave it up to focus on interpretation, he sometimes thinks about starting again.

The key to his success has not been talent but consistency, he says, as he explains that even now, he tries to practice at least four hours daily. It is not all work and no play though and he tries to take advantage of the many interesting activities that New York City has to offer. “In New York, there are many things to do.  I go to concerts, operas, chamber music recitals, I also listen to other pianists, at Lincoln Center, for instance.”

Little by little he has created a life for himself in the big city although, being the only Chilean to study at the Juilliard, he sometimes suffered from loneliness. Constant traveling can also be wearing.

Miranda-Bernales explains that his plan for the future is to focus on “playing because one always has to be practicing. In this sense, piano is not like other academic disciplines where one can reach absolute knowledge. One day, perhaps, I would like to start composing again. In the past, musicians used to compose, they performed, played different instruments and were much more polyvalent. I would like to return to this.”

Gustavo Miranda-Bernales has a busy schedule of local and international concerts coming up. His career progress has benefited from the financial supports of different institutions like the Association of Friends of the Teatro Municipal, as well as scholarships, positive reviews and awards.