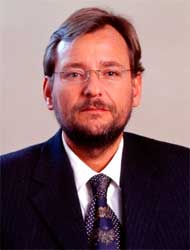 Patricio Donoso Ibáñez is full professor at the School of Management of the Catholic University, and currently serves as Provost for Institutional Managerial Affairs. Until March he was the Vice President for Economic Affairs of the University. As a Provost he is in charge of the supervision of the companies and foundations related to the University, including a TV channel (Canal 13), a health network (Red Salud UC), a technology transfer company (Dictuc UC), and a technical training foundation (Fundación Duoc UC). He also is a member of the CHRISTUS Health System Board, in Dallas.

He received a Civil Engineering degree from the Catholic University and then a M.Sc. from the Massachusetts Institute of Technology. He has also served as Deputy Dean at the School of Engineering, and Director of the Extension Center of the University. In this latter post, he was in charge of the Centennial celebration and of the first fund raising campaign of the University.

He has also been a consultant for large chilean and international companies and institutions, such as Codelco, LAN, Entel, Andina, FASA, CAP, Arauco, and Anglo American.