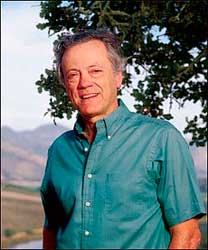 Born in Santiago, Chile, Agustin Huneeus began his career there and is one of the few vintners who has dedicated his entire professional life to the wine industry. He entered the wine business in 1960 as chief executive officer of Concha y Toro. Then a small winery, Concha y Toro grew to become Chile’s largest winery under Mr. Huneeus’ leadership. In 1971, Chile’s difficult political climate led him to leave his home country. He subsequently headed Seagram’s worldwide operations, responsible for wineries in nine countries, including Paul Masson in the United States. Upon leaving Seagram, he founded Noble Vineyard in 1977, which later acquired Concannon Vineyard, a premium winery in the Livermore Valley.
Mr. Huneeus became partner and acting President of Franciscan Estates in 1985. Under his leadership, the ailing company was transformed into a successful group of premium wine estates. In 1999, he sold his interest in Franciscan Estates. Today, he devotes his time to realizing his dream of developing Quintessa into a world-class wine estate. He also maintains ownership of Veramonte Winery, in Chile, and vineyards in Alexander Valley and Napa Valley.
Mr. Huneeus has been actively involved in many industry activities, including Wine Institute and Napa Valley Vintners. He was awarded the Distinguished Service Award by the Wine Spectator in 1996. He is an accomplished and enthusiastic aviator, cellist, skier and horseman.