Rector of the University, Ignacio Sánchez, on the 130th anniversary of UC:

“We are determined to continue working towards being a safe, respectful and integrity-promoting university” 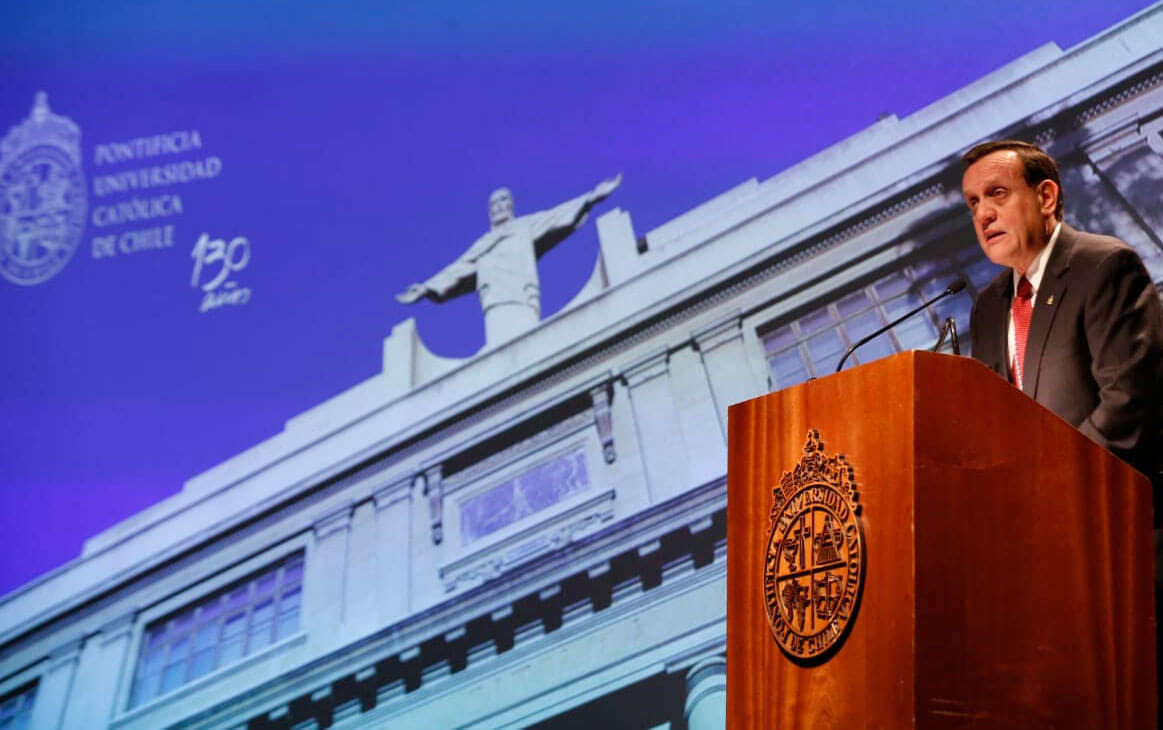 With enthusiasm and in the presence of many members of the UC community, the anniversary of the University was celebrated. The Rector of the University, Ignacio Sanchez, gave the annual account of his Office, in which he presented on the management of UC and reviewed some of the most relevant highlights of 2017.

“Today, 130 years after the foundation of the University, we reiterate our will and conviction to aspire to be a Catholic University that strives for its autonomy from external factors and with full academic freedom, which cares for and promotes the development of its community, centered on cultivating knowledge and caring for the dignity of people. This is done through the development of innovative teaching, with quality and equity, research and knowledge transfer at the frontiers of learning, with a strong commitment to the development of society and the service of our country.”

Then he referred to the passing of the law that will govern Higher Education in our country. “The project was the result of several years of discussion, which was carried out partly through the logic of defending the interests of each of the stakeholders rather than with a sense of advancing in quality and equity for the benefit of the students, institutions and the country.”

He also stressed that there are three important unresolved issues that may hinder the development of the university system. The first of these is to reduce overregulation, the second is to better define the regulated tuition fees of the different degrees offered by each university, which are of very different quality, and to perfect the fee-fixing imposed on students of higher income brackets that currently are not subject to free admission.

Thirdly, he said:” Finally, non-state public institutions, now grouped in the G9 Network, that represent a very significant group of the best universities in the country and that are, in much of the national territory, contributing to the development of their communities, are at serious risk of underfunding due to the scarcity of their baseline contributions and what should correspond to their performance and contribution to the country.”

The Rector of the University highlighted that in the 2018 admission process, the university maintained its lead in capturing the best PSU scores nationwide: 58%.

Among the most important milestones of the recent period, he mentioned the visit of Pope Francis as a key moment. He also said that the university actively participated in the public debate on the law decriminalizing abortion on three grounds. Additionally, last year the creation of the Foro Universitario was approved, a new internal structure for discussion and analysis; a new process of institutional accreditation began; the fourth version of the UC Dialoga was made; and multiple initiatives were carried out in Santiago and different regions of Chile.

Regarding the recent takeover of Casa Central, he said:” It was a violent act, -as is always the case with a takeover of university premises-, spaces that, from the point of view of reason, must always be open and available for dialogue and the exchange of arguments and opinions, without force, coercion or violence.

Along with categorically rejecting this expression of violence, I value the dialogue that was generated with student representatives and support reached for the agreements with the occupants of Casa Central, so that we were able to end the takeover within three days.”

“We are determined to continue working towards a safe, and respectful university that promotes the integrity of each of its members. A university in which no discriminatory, offensive and violent act, in any of its forms, in particular from a sexual perspective, will have place, either on our campuses or in our activities.” He also emphasized and presented once again the “UC Prevention and Support Policy for Victims of Sexual Violence” and the document “Guidelines for faculty members for the prevention of sexual violence at UC”.